The story of Good Shepherd in Aotearoa

A voyage across the world, a stubborn Archbishop, a society that punished unmarried women and risky debt that was taken on to support those women – are all part of the story of the Good Shepherd Sisters arriving in Aotearoa.

Good Shepherd has worked in New Zealand for over 130 years with the determination to assist women and in children most need.

It was originally founded in France in 1835 by Saint Mary Euphrasia who grew tired of the lack of support for women and their children. Saint Mary Euphrasia was a determined woman who let no obstacle stand in her way to support those in need. Her values for justice, reconciliation, the value of each person, zeal and audacity have remained an important foundation for the work of Good Shepherd across the globe.

Good Shepherd NZ is part of a network that spans more than 70 countries. The Good Shepherd International Foundation has special consultative status with the Economic and Social Council of the United Nations for its work with women and girls.

In this story, you’ll discover how with determination and the values of Saint Mary Euphrasia, the Sisters of Good Shepherd were able to reach New Zealand and provide some of the first long-term support for women and children in Aotearoa.

Father Lawrence Ginaty and the value of each person

Father Ginaty was a priest whose work included the women’s prison in Christchurch. He became acutely aware of the unmet needs of women when they returned to the community, particularly their need for a safe place to live.

The tipping point for Father Ginaty was when he was called to the house of a woman he once met called Maggie. He found her in a drunken state after she had just had an “under the table” abortion.

She was rushed to hospital and died soon after.

Abortions in the 1800s were illegal but happened often because society did not accept women or children out of wedlock.

This attitude gave women little protection – with no money or support from the government and nowhere to turn it often left them in a cycle of despair.

Father Ginaty shared Maggie’s story across New Zealand to bring a voice to the women who needed place and support.

He also wrote to Good Shepherd asking for the Sisters to bring their mission to support women and girls experiencing disadvantage to Aotearoa.

This letter began the uphill battle to get the Sisters to New Zealand. 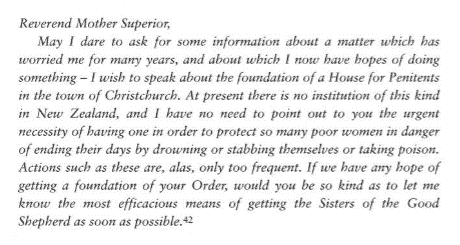 Father Ginaty explained that a foundation for the Good Shepherd Sisters would be feasible as he had recently been entrusted with a legacy of £2000.

In July 1885 Mother M. of Mt Carmel forwarded a copy of this letter to Mother M. General who replied with a letter agreeing to the foundation.

Mother M. General had organised with Abbotsford in Melbourne to send four Sisters to support women in need by taking the mission over to New Zealand.

Everything seemed to be in place until Archbishop Goold forbid any sister from leaving for New Zealand because he believed they had enough work to do where they were in Australia.

Because Archbishop Goold said no, there was nothing the Sisters could do – it was a man’s world.

Father Ginaty however did not give up. He continued to do everything in his power to try and get the Good Shepherd Sisters over to New Zealand.

Despite constant pushback from the Archbishop, Father Ginaty was determined to get things underway for the Good Shepherd Sisters so they could support the women and children slipping through the cracks.

He went on to purchase 200 acres about five miles from Christchurch for the Sisters to set up the Good Shepherd foundation – a safe haven for women and girls.

However, the purchase of the land cost £8,500 – which Father Ginaty did not have.

Father Ginaty ended up taking out a £2,000 loan from the Bank of New Zealand, and the balance of £5,000 was paid from a mortgage raised by Father Ginaty on the property itself.

The £2,000 loan from the Bank of New Zealand saw Father Ginaty get into unmanageable debt and almost saw the end of the Good Shepherd foundation.

Despite the Sisters still not being allowed to come over because of Archbishop Goold, Father Ginaty pressed on with building the foundation – Mt. Magdala – named after Maggie.

But there was still the problem of no Sisters, so Father Ginaty decided to visit the Archbishop Goold.

Father Ginaty stayed with Archbishop Goold and was given a tour of his palace and the foundation of the Good Shepherd Sisters in Australia. Father Goold told Father Ginaty that he was welcome to anything, but the Sisters.

With no hope of getting some of the Sisters to New Zealand, Father Ginaty went to return to New Zealand but ended up missing his train – which you could almost say was destiny.

Now with no one stopping the Sisters from going to New Zealand to support women and girls experiencing disadvantage, and with the blessing of Mother M. of Mt Carmel, the four Sisters quickly packed up their things and headed to New Zealand just six days after Archbishop Goold passed – I suppose before anyone else could stop them.

When the Sisters finally arrived in New Zealand it was in some ways anticlimactic. Mt Magdala was still 18 months away from being built and Father Ginaty’s debt was now at £7,000 with high-interest.

The Sisters moved into a small house to begin their work but it would prove to be challenging.

The catholic community were not the most welcoming to the Sisters.

Eventually the Sisters secured their first contract – laundry. This would help contribute to the spiralling debt that father Ginaty had, but it wasn’t enough to make a dent.

Mt Magdala still needed to be built so Father Ginaty took out more loans from members of the community to keep momentum.

The bank debt was now at £8,500 and now the Bank of New Zealand was asking for repayment. To add to Father Ginaty’s stress he also needed to pay the builders and others in the community he had borrowed from.

Father Ginaty left Christchurch and spent the following years travelling up and down the country to try and raise funds. Meanwhile because the Sisters work was so vital, they needed to support more women and girls than their temporary accommodation could keep up with.

Whilst Father Ginaty was away finding money, Mt Magdala did get built and the Sisters were able to create their foundation for women and girls experiencing disadvantage. The foundation stone was laid on 17 February 1886 with more than 5,000 people present – which proved just how much of a need there was in New Zealand.

As the Sisters continued to established themselves and demonstrate the importance of their work, people began donating to Mt Magdala. Father Ginaty was also able to work with the government and remortgage the land to slowly pay back the debt.

The Sisters were now in the clear from the debt that had been following them since they arrived, which meant they could now expand across the country to support more women, girls and their families experiencing disadvantage.

In 1932 a house was established in Auckland and another in 1945 in Upper Hutt. The Sisters moved from Upper Hutt to Te Horo in 1953 so they were able to have more land.

In 1966, they took over the administration of “Rosanna” at Waiwhetu, Lower Hutt, a hostel for young, unmarried expectant mothers.

After almost 100 years of carrying out their mission for women and girls in the residential settings, the Sisters responded to changing social policies by closing the institutions. They moved into smaller residences to live and work more closely with local communities.

In the last 30 years the Sisters have worked in Wellington, Lower Hutt, Palmerston North, Taupo and Mt Roskill, Papakura, Papatoetoe and Manurewa in Auckland.

The Sisters worked to address some of the issues that cause women and girls to become marginalised.

This includes homelessness, unemployment, lack of education or work skills, being at risk of exploitation, lack of family support and nurture, addiction and poverty.

Good Shepherd NZ was established in 2012 to continue the Sisters’ work – to support better futures for women, girls and their families experiencing disadvantages.

The organisation has developed strong, values-based relationships with partners to meet emerging local needs and contribute in a meaningful and sustainable way. 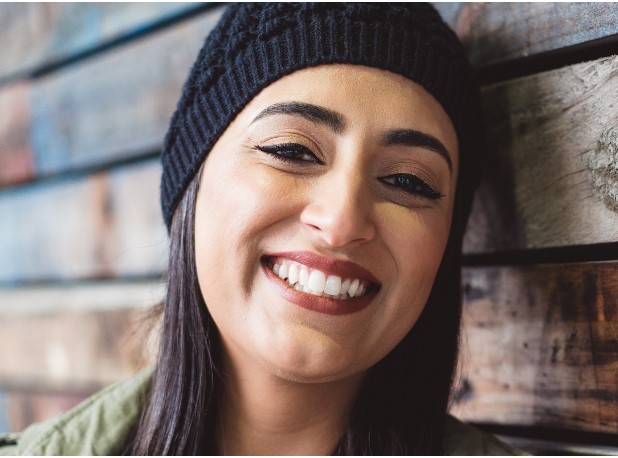 Five small changes you make to help save money

By making a few small changes, you can make an impact and start having a little bit more in your savings for those rainy days.
Read More »
08/07/2022

Banks ‘need to know how to deal with protection orders’ 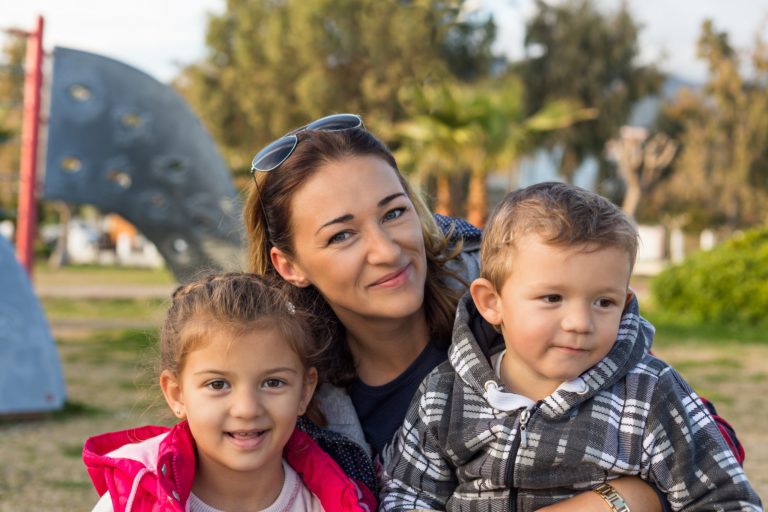 I had to stand up for myself